For as long as I can remember I have wanted to live in Hawaii. You couldn’t tell me Magnum P.I was the only person fortunate enough to live in Hawaii! Well he was the only person I saw on television living what we now call “HIS BEST LIFE” as a private investigator on the islands. I just knew one day I would have the opportunity. I did everything possible while I was active duty Air Force to snag that assignment, it was always on my wish list, I even offered to swap with anyone who wanted to leave. I guess it just wasn’t meant to happen until February of 2017. The good thing about having a military family is that they love for anyone to come and visit, and anyone I served with I consider family. And yes guys, my sister Mel lives in Hawaii!

After a rough flight from Atlanta to LAX and an overnight stay in a very questionable hotel (I am sure the guy outside my room was selling weed, but I didn’t dare ask) and monsoon type rain that lasted hours and didn’t stop before takeoff. The skies cleared up and the flight was smooth right into Oahu. Now, I love Delta, but Hawaiian Air, can get my money anytime. Not only was the flight an excellent price, the plane was beautifully decorated, the flight attendants were Hawaiian, and the food and snacks were top notch tasty. Yes, macadamia nuts, and purple yucca chips that I fell in love with immediately, and ladies, its considered international so you get that free glass of wine. So here I was, feeling like a mini celebrity in economy with my window seat, waiting to land in the place that I have loved since childhood. Yes, I was getting over a bad cold, yes it was probably the flu, yes I still felt like shit, yes I was sleep deprived, but I just landed in Hawaii and I didn’t want to hear anything but Aloha!!!!!!!

The landing was spectacular, lights glistening off the water, and walking through the airport, the air smelled good, like flowers. Even if it didn’t, in my mind, the air smelled like flowers. I met Mel and her son who was now 19 at the curbside pick up and they draped me with a lei of the most fragrant flowers. I was literally dripping in Jasmine, but I think I had an allergic reaction to the smell since I was sick. Instant headache. Good thing they had a bag that I could put it in and keep it fresh in the fridge until I was feeling better.

Now Mel told me she lived in what was considered a traditional home a few steps from the beach, she wasn’t lying! It was a few steps from the beach!!!!!!!!!! So not only am I in Hawaii, but I am literally in Hawaii staying on the beach.  Tomorrow was a light chill day, lunch in Waikiki and a quick catamaran ride as a treat to celebrate a friends birthday. She asked if I get sea sick, me, Nyri, sea sick, never and definitely not from a catamaran. I was told it’s a booze cruise of sorts, spend about 2 hours enjoying the sights of Waikiki, sip Mai Tai’s and laugh. Sounded like a plan to me, I was ready for anything. 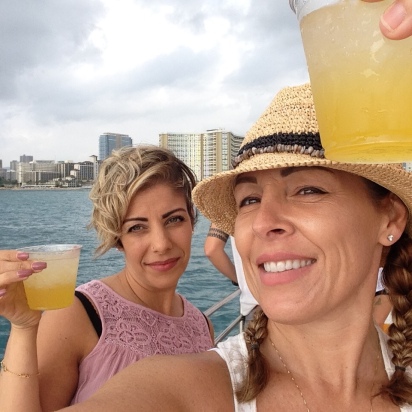 Problem number one, why didn’t I remember that 5 days previously I had been sick as a dog, with a fever and throwing up and my body was just recovering, I was still taking medicine, and my stomach was a bit queezy. Secondly, I had never been on the water in Hawaii, I had no idea if the seas were rough or if the humidity would be an issue since I just left the cold in Atlanta.  Lastly, who told me to drink alcohol while taking medication? This combination resulted in me going from a smiling overzealous traveler, to laying down on a bench with ice and ginger ale, to leaning over the rails throwing up what seemed like every once of food I had eaten in the last 2 weeks.

Not only was I throwing up, I was throwing up with the wind blowing in my face, so throw up was in my hair, on my clothes and to top it off you could see my ass from across the boat! Thank God for good friends, Mel ran over and held up my pants when she realized I was quickly becoming a “woman overboard” risk. Funny thing is, I couldn’t stop laughing at the scene. Here we were about 30 minutes from her house, I was covered in throw up, running off the catamaran to the nearest hotel bathroom and the remainder of the family commented “she said she doesn’t get sea sick”. That became the catch phrase for the remainder of the trip “she doesn’t get sick”.  So to make the best of the situation, I cleaned up as best as I could, prayed I didn’t smell (I’m sure I did) and enjoyed the lovely hula dancing, shopping area as well as a block party in the street. 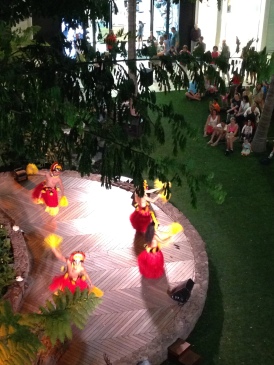 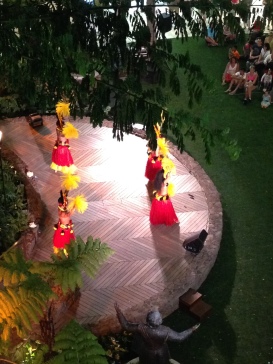 I made a b-line for the shower once we got home, and luckily the next day was filled with monsoon type rain, so I could rest and recover from my shame. Whenever I start a trip with something completely un-nerving, I know I can add the trip to the books and write it down in history as one of the best. Hawaii was no different and it definitely didn’t disappoint!

5 thoughts on “Welcome to Waikiki! My First and Worst Day in Hawaii!”